It was March 29, 1898, in the old Public School Building on Main Street, that a meeting was
called to order by David Outcalt. The purpose of this meeting was to organize a fire
company to protect Spotswood, which, at that time was part of East Brunswick. The
Borough of Spotswood was not incorporated until 1908. The Enterprise Hook & Ladder
Company of Spotswood was incorporated on May 10, 1898 in order to protect life and
property from fire. At that time thirty two men were elected as members. By August of that
same year the membership had increased to sixty eight men.

The first firehouse in Spotswood was built at a cost of $130 and was located in the rear of
Underhill and Cornell’s store on a piece of property owned by Mr. A. DeVoe. A fire alarm was
donated by the South Amboy Fire Company. The first piece of fire apparatus was purchased
from a Long Branch company on June 6, 1898. The cost was $56 plus $45 for repairs and
alterations.

On the night of October 31, 1898, the Enterprise Hook & Ladder Company answered its first
‘alarm of fire’. The fire was located in a building owned by George Appleby near “Little Pond”.
The building was of little value and the pumps were not turned on until the fire was well
underway. When the water was turned on, the firemen were gratified to see that the pump
was performing satisfactorily. Also that year the company bought a Ford
Model “T” Chemical truck for $1,975. At the
same time, pumping stations at the lake
and other streams were being completed in
order to obtain water to extinguish fires
At the fire company’s annual meeting held on January 24, 1928, William McMulkin offered a resolution, “that the members of the Enterprise Hook & Ladder Company desire to come under Borough control.” A second resolution offered by Frank Vliet, “Whereas the members of the Enterprise Hook & Ladder Company have voted for in favor of Borough control, that we offer for sale, and will sell to the Borough of Spotswood, New Jersey, the firehouse and lot situated on Main Street. Also the fire apparatus, consisting of two engines, a pumper, and a chemical truck will be sold for the sum of one dollar.” This action was taken to permit
the firefighters to join the New Jersey State Firemen’s Relief Association, and also prompted the company’s name to change to the Spotswood Volunteer Fire Department. Spotswood’s Relief Association was formed on March 28, 1928 with Arthur D. Appleby serving as Relief Association President. Fire alarm call boxes were installed within the Borough during 1929 in order to provide a more effective method of reporting fires; this system became obsolete and fell into a state of disrepair, and was removed in 1971, by the time most fires were being received by telephone.

When a municipal water system was installed in 1935, it was then possible to install fire hydrants and mains throughout the Borough, thus eliminating the need for the old pumpingstations at the lake. The following year a Diamond “T” pumper, capable of pumping 500gallons per minute, was added to the fleet.
On November 14, 1938, thirteen wives of the firefighters met with two representatives of another joined together as the charter members of the Spotswood Fire Departments Ladies Auxiliary. At a special meeting in September of 1943, it was decided to discontinue meetings for the duration of World War II. The Auxiliary was reconstituted in February of 1949 and has continued to serve to today.The planning and construction of a new firehouse began, and it was a sad day for many firefighters when the old firehouse, home to the department for fifty years, was torn down in 1958. As Spotswood’s industrial and residential sectors grew, the need for additional apparatus in the department was needed. In 1964, a 750 gallon per minute Ford Hahn pumper was purchased which became the first engine “72”. This would end up being the departments last apparatus that only had seats for the driver and officer in the front. This meant the rest of the crew had to “ride the back step” on the way to emergencies. In 1967, an International Brush Truck replaced the 1928 Ford Model “A”. In 1971, an additional firehouse was constructed at the current location of the Borough Yard/Recycling Center. The need for this firehouse arose from the long trains that would travel through town at times blocking all of the 4 main railroad crossings. 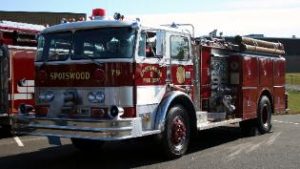 In 1973, during the 75th Anniversary of the department, Engine 74, a 1,250 gallon per minute Hahn diesel powered engine was purchased to replace the 1936 Diamond “T”. Engine 74 held a few firsts for the department, being the first diesel powered apparatus and the first with a crew jump-seat area. A new chief’s car was also purchased. In 1981, the 1954 Ward LaFrance was placed on reserve status when the department acquired Engine 79, a 1,250 gallon per minute Hahn diesel powered pumper. At first glance engine 74 and 79 would look like twins with the exception of their obvious age difference and difference in body style. However 79 held a major advantage as it was the first apparatus with an automatic transmission. In 1988 the department got the go ahead to purchase a new brush truck to replace the 1967 international brush truck. This truck still serves as the brush truck to to this day in the 2020s. In 1991 the department purchased what could be considered its first “modern” apparatus that utilized modern electronics and technology. This was the replacement for engine 72 and was the departments first pierce. The new “72” was a 1991 Pierce Lance pumper with a 1250gpm pump and a 750 gallon tank. It served the department as an engine and was also the first apparatus to graduate to 5″ large diameter supply hose we use today. 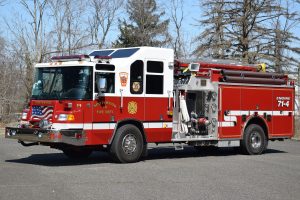 This brings us to the current era of the department which began with the purchase of engine “74” which replaced the 1973 Hahn, and was significant in many ways. “74” was the first apparatus with a fully enclosed seating area for the entire crew, it was also the first to be outfitted with equipment for vehicle extrication. Engine 74 is a 2001 Pierce Quantum pumper with a 1500gpm pump and a 750 gallon tank. A few years later the department acquired a 2003 Ford F350 pickup truck used with extremely low mileage. The truck was acquired utilizing funds from the recycling committee the department operated to assist the town with bulk metal pickup. The truck would initially serve as a means to trailer the departments 1921 model T to shows. Later on the operational division of the department sought the use of the pickup to assist in carrying equipment for the expanding services the department provides. In 2008 the recycling committee was disbanded from the fire department and turned over to borough control. The remaining funds were utilized to purchase the 2008 Dodge Durango which would serve as one of the 2 chiefs vehicles until recent replacement in 2022. At the same time the borough had placed the order and was awaiting delivery of the 2009 Pierce Quantum pumper Engine 71-1. The arrival of this engine led to the retirement of engine 79 and also marked a change in the departments numbering scheme. All of the departments vehicles would now bear the number “71” which represents the departments county number designation. The 71 would be followed by a hyphen and the radio call sign of the apparatus. Again aside from a few minor differences Engine 71-1 would appear as a twin to 71-4 with a 1500gpm pump and 750 gallons of water. In 2016 the department would receive a 2016 Chevy Tahoe Chiefs vehicle which would mark the first time both chiefs were operating vehicles purchased specifically for the department. Prior the department usually operated a vehicle previously assigned to other departments throughout the borough. After Hurricane Irene swept through the borough causing incredible damage and flooding that had never been seen before, the department recognized a need for a water and ice rescue element in the borough. After the purchase of an inflatable boat and the various other equipment required as well as an incredible amount of training. The department is now equipped and trained to handle water and ice rescue emergencies. In the late 2010s Engine 71-2 formerly “72” began to show its age not to mention with its open style riding area causing a safety risk. The department began planning its replacement and the committee determined due to the changes within the community, a multipurpose apparatus that had a ladder as well as a pump would be the best fit. 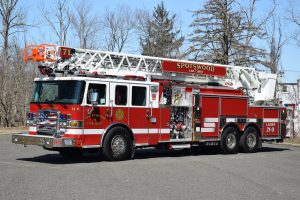 This brings us to the acquisition of Ladder 71-9 which is a 2020 Pierce Enforcer 107′ Ascendant ladder. 71-9 has a 2000gpm pump and a 650 gallon water tank on top of the 107′ aerial ladder the truck is built around. While there are no sky scrapers in Spotswood the housing set backs, large warehouses and multi story senior citizen housing create the necessity for a large ladder. This truck allows the department to reach areas which are normally beyond the reach or are inaccessible to ground ladders. Currently the department is approaching its 125th anniversary so stay tuned and return periodically to see what the next 100 years will bring us!